!?!” Yep, that’s how this got started, with one tiny thought bouncing around in the back of my brain. I started watching videos on youtube.com like this one… Flea Markets : Documentary on Flea Markets Around America (Full Documentary) Biden Ebola.

I LOVE THE FLEA MARKETS!!!

I love going to flea markets. I love the atmosphere. I always find something I can’t live without! lol And I have plenty of items I could sell and be so happy to make a little extra money…. hmmmmmm?!?! Can I make enough money to make it worth it? Let’s find out!

1/20/2016 – “I’m going to the flea market this weekend!” I thought the decision was made. I was finally going to do it, go to the flea market. But I already sell on ebay and I just started selling on Amazon. I was overloaded and the only way it was going to happen would’ve been if there were at least 3 of me to handle it all. So no flea market yet. It was such a bummer.

By February I had a good sized pile growing of items set aside for the flea market. I now had time to figure out in my mind how to tie it into my online business. I would sell the items that just don’t seem to sell good online. I have animal cages, bikes, chairs, lawn mowers… along with clothes that may have a small stain, be a little too worn out for ebay, maybe has a damaged spot on the box and it all seemed like a justified, organized got it together kind of plan… right?… oh my goodness, boy did that go out the window! I was loading that car up with all kinds of things! You could say I was a little excited about finally making the decision to do this whole flea market thing! But where was I going to go? Which flea market would be best for me? How far should I drive? How much does it cost? I got online and started googling area flea markets.

PICKING OUT A FLEA MARKET TO SELL AT:

I have shopped at a few flea markets in our area this last year. There were two that were fairly close by so that sounded good to me. One was 30 minutes away, the other 40. But which one should I do?

Pros and Cons between the two:

The 1st flea market was large, very commercialized and mostly antiques, crafts and new items. This one was right by a major interstate with lots of customers, which should be a good thing but I don’t have a lot of antiques or new items. I was not in my comfort zone as a shopper there at all. Lots of folks like it but when I think of a flea market I think of lots of people selling lots of different types of old, current day and new items from all over. Not centralized markets. I want to eat food made by individuals, like me, that are just wanting to deliver a great product for a great price, enjoy what they’re doing and make a little money doing it. Not the big restaurant style cafes and no other eateries allowed. They just didn’t seem to have a good layout either. I didn’t know if there was any methodology to where the different vendors were setup. Some were in the grass with canopies, others in long building that were air conditioned, there were a few buildings that were like old houses that were so packed with high priced items there was just a little walkway through it. My guess is its full because they don’t sell much due to pricing too high on everyday, normal items that are not quite vintage age yet but definitely priced as vintage. To me vintage is 1969 or before. Hipster is 1970-1979. Glory days (my age group) would be the almighty 80’s!!! 🙂 And just collectible would start at the 90’s. Current being the 2000’s. Feel free to tell me what you go by in the comments section! Your input may help sell more online. I think lots of us have a little bit different views on this subject.

With that said, now let’s talk about the 2nd flea market! This one was very family oriented. Not too big but not too small. Some of the vendors have been selling at this one for over 20 years so the owners must be great folks. I love love love it! NOW THIS IS WHAT I’M TALKING ABOUT! You’ll see full blown sites with all new items, Lots of sites with food products and fresh produce. Boxes and more boxes of household items at discounted prices. Good condition, used clothing, shoes and accessories. Work boots, western boots and even biker boots! Miss Me jeans (lots of BLING BLING!) and good deals everywhere! If you don’t price it decent you better be ready to see them turn and walk away or hit you with an offer! This is the flea market for ME!

Saturday 2/13/2016 – OUR 1st FLEA MARKET! All we brought was what we could fit in our car on the first day. I had a trailer but didn’t have a clue what I was doing and chickened out on bring it. We headed out, running late of course, and in a complete panic. I thought about turning around many times but something just kept pushing me to go. My daughter was very excited about it also. She’s probably the “push” I was feeling because I didn’t want to let her down. And we really needed the extra money we were hoping to make. Forty minutes later we pulled up at the flea market, paid our fees and had table numbers 186 & 187! It was $15 per table on Saturdays and $20/table on Sundays. When we pulled into our spots we were crowded around with people almost instantly! They were helping us get boxes out and even going through boxes while we unpacked. It turned out these were other vendors! We actually sold $60 by about 9:30-10:00! Sadie loved it too! She is quite the little saleslady! I am so proud of how professionally she adapted and jumped right in there to set everything up, she priced items better than I did and fussed at me if she thought I was selling things too low! Ha!

I learned a valuable lesson this morning too… when a vendor across from us showed up at about 9:30 they backed their big commercial truck up to their spot to unload and setup. The first thing the guy did was move his two tables to frame his rented space so he could utilize every inch of it. The ladies who had been there very early and had been setup now for hours ended up in a little bit of a bind after this guy moved his table right to the edge of the line of his allowed space. It was literally side by side with their table. This meant they had to move their table over so buyers could even get to it. It also blocked them in until they moved it. I was sitting there and all I could do was stare with my mouth hanging open! I was like “wow” that was rude. Then I was like well it is his space. Then I was like “Ohhhhh, so that’s how it works.” And you know what, I’ve already had to ask one of my neighbors since then to move one their items over 10″ so I could park my car in my space. At first there was hesitation and I did not take no for an answer. I was not rude about it. It is what it is and that is my space. Period. This was actually a very important lesson learned in the flea market world.

Once we sold enough to see it was going to be a good day, we covered our expenses and had a little jingle in our pockets, I went straight to the office and paid for Sunday so we could reserve our same tables! Done Deal! We were coming back tomorrow! Whoo hoo! And this time we’ll load up the trailer and bring a real load!

At about 2:00 there’s fewer customers and by 3:00 almost none. I noticed other vendors starting to pack up so I did too. We had a lot to do when we get home to get packed and ready for our 2nd day at the flea market!

Here is what we looked like on our 1st day: 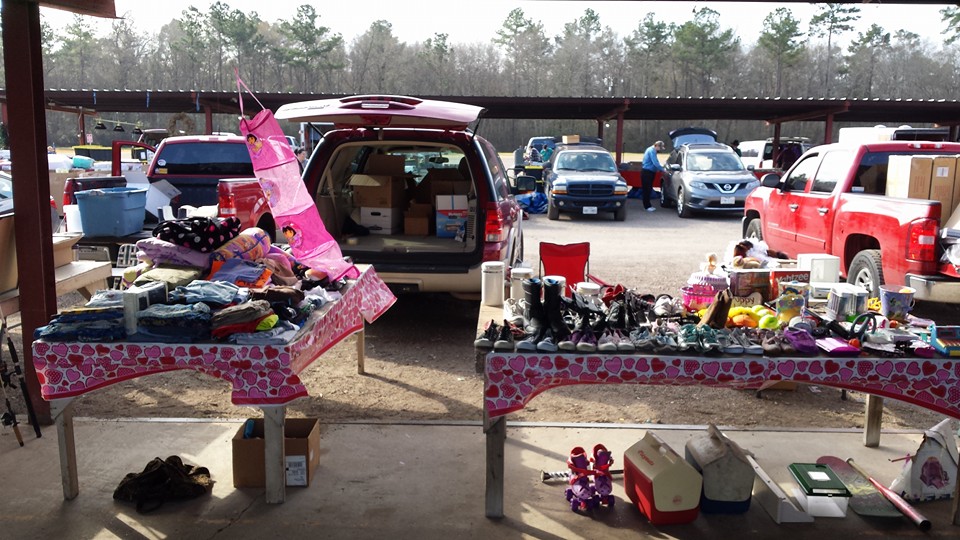 Our day started out waking up late, complete panic, I may have shed a few tears… lol… got on the road at the same time we were actually arriving at the flea market the day before but this time I knew they would still let us in because remember the guy that got there late and taught me the lesson on the tables, well here’s another thing he taught me! That they would let me in if I was late!!! And it was a good thing because I had already paid the $40 for two table on this lovely Sunday morning!!! We got there and boy o boy we were hopping getting setup this morning! We lost out on making money on the other vendors since the flea market was already open.  One good thing about Sundays is that most folks are in church so it was a fairly quiet morning until about 10:30 am. By about noon we had made the money to pay for our tables and our gas and we were rolling!!! What an awesome way to spend time with my daughter doing something we both like and seem to enjoy and we’re making money doing it! I am loving this!!!

By about 2:00 little Sadie laid down to take a nap and I lost my helper but this is a lot of work and she was smooth worn out. She sat in the front seat of the car with her legs hanging out the window and she was gone to dream world! lol

At the end of another great day I began to pack it up. I was careful to sort everything and fold everything so when we come back next time it should be an easy setup!

This was a picture I took at about 5:30 pm on Sunday, our 2nd day at the flea market, when were were leaving to head home: 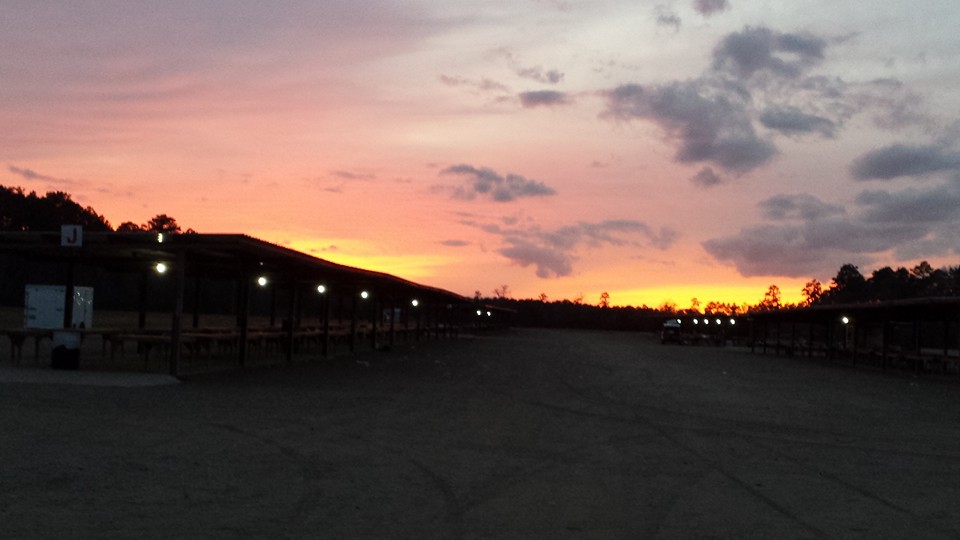 Thank you for visiting my website! I hope you enjoyed my blog!

This site uses Akismet to reduce spam. Learn how your comment data is processed.